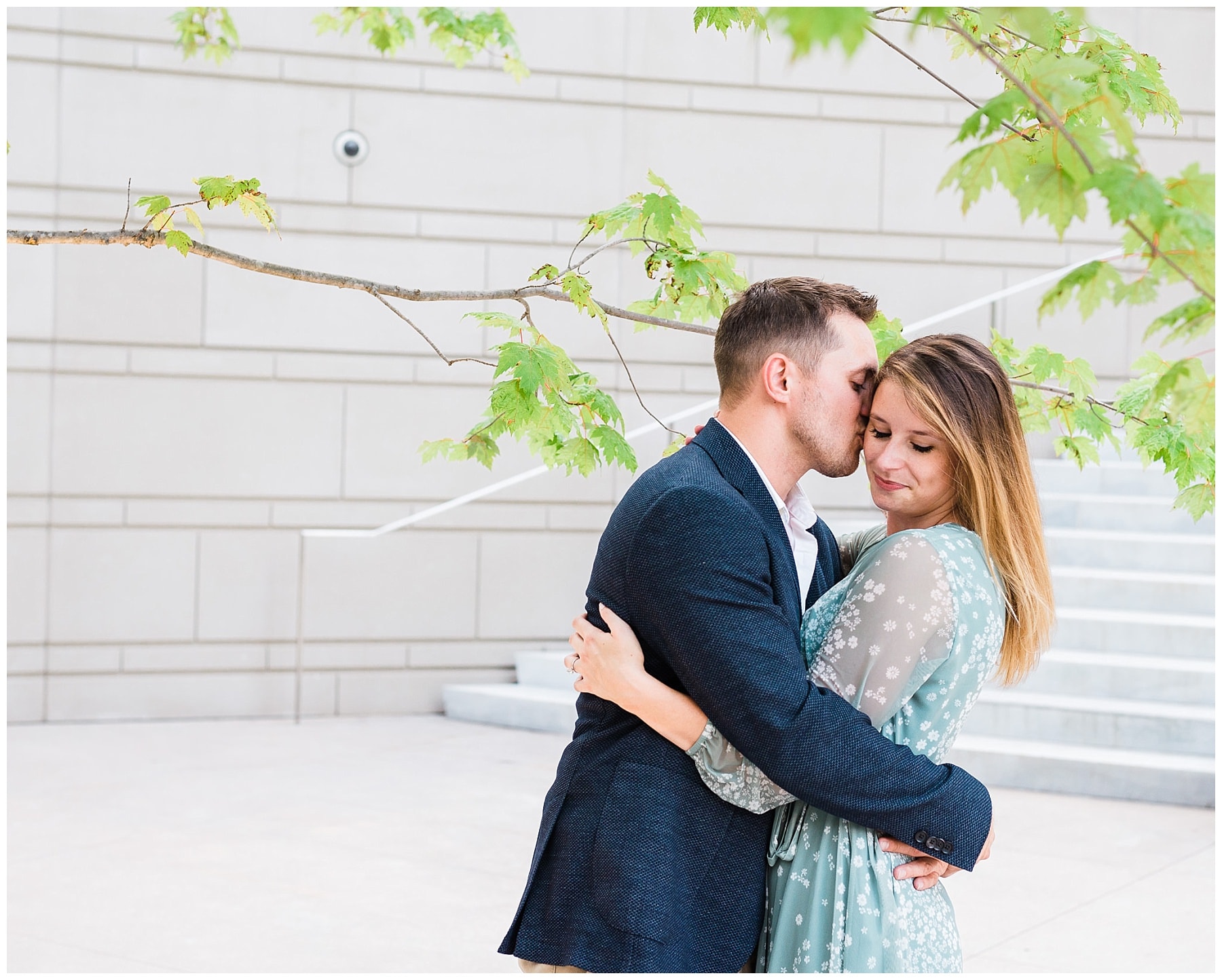 About the couple and how they met

Rylee and Tom met where all great relationships start… Tinder. She right-swiped on the cute guy with the dog and he sent her a cheeky “You look like you’re partying your a** off on that boat” to get the conversation going.

Tom works in manufacturing and loves laser engraving. When I was getting to know Rylee and Tom during our Zoom wedding consultation, Rylee warned me that Tom was probably going to try to have something custom-engraved for their 2021 wedding. 😉

Rylee has dual professional interests, working in both accounting and the education/consulting arena, focusing specifically on advocating for students with special needs.

And last but not least, Augie Doggie, and nine-year-old Chihuahua, is the third member of Rylee and Tom’s little family. Fun fact: Augie is named after a character from the golden age of cartoons.

How they fell in love

Tom and Rylee both identify as extroverts and love being around the people they love. They both agree that one of those “Wow, I’m in love!” moments happened when they were at Streeter’s with a group of Tom’s friends and they were at opposite ends of the bar having interesting conversations. They got to see the other person in their element chatting, laughing, and sharing a drink all while knowing their partner was still there for them, too.

Tom’s family has a lake house in Canada, and every summer during “Family Week” his family descends on this cottage for a full week of home-cooked meals, drinks, swimming, boating, hiking, and celebration. There was a running joke that the cottage was cursed because Tom had brought a few girlfriends up there before but they never lasted through the rest of the summer.

Rylee clearly broke the curse because on her third time back up to Family Week, Tom proposed. He knew that it was so important to Rylee to have my parents there, so he invited them to make the trip as well. They had just finished taking Christmas pictures when Tom asked for one shot of just the two of them… So, everyone filed inside to press their faces up against the glass and watch.

Rylee had no idea he was proposing because it went something like, “I love you so much, we do such dope s*** together. Do you want to do dope s*** together forever?” (This is an inside joke based on a Dave Chappelle/Kanye West skit) and of course, Rylee said yes!

With the engagement ring on Rylee’s finger, they celebrated over glasses of champagne, rode on the boat with their families, and ended the night by washing the dishes and snacking on ice cream cake. (Fun fact: Rylee and Tom are planning to serve ice cream cake at their 2021 wedding reception, too!)

Rylee and Tom followed my engagement wardrobe tips perfectly, so they looked super cute together as we started the session with some mural portraits before inviting Augie to join them “on camera.” Their friends Morgan and Jeremy (members of the wedding party next year), tagged along to help us with Augie’s leash when he needed a break from taking photos.

While we were taking a break to give their puppy some water, Tom got some rings out of Rylee’s bag and asked if we could photograph them, too…turns out the three bands he had were his grandmother’s wedding rings, which will be melted and crafted to create his own wedding band.

We created a vignette with Rylee’s engagement ring and the heirloom wedding bands, and while small, these heirloom items bear huge significance for Tom and Rylee’s story.

The next time I photograph that gold it will be on Tom’s finger! chicago riverwalk engagement session

We ended the session with some fun photos at the Northman Beer and Cider Garden. chicago riverwalk engagement session 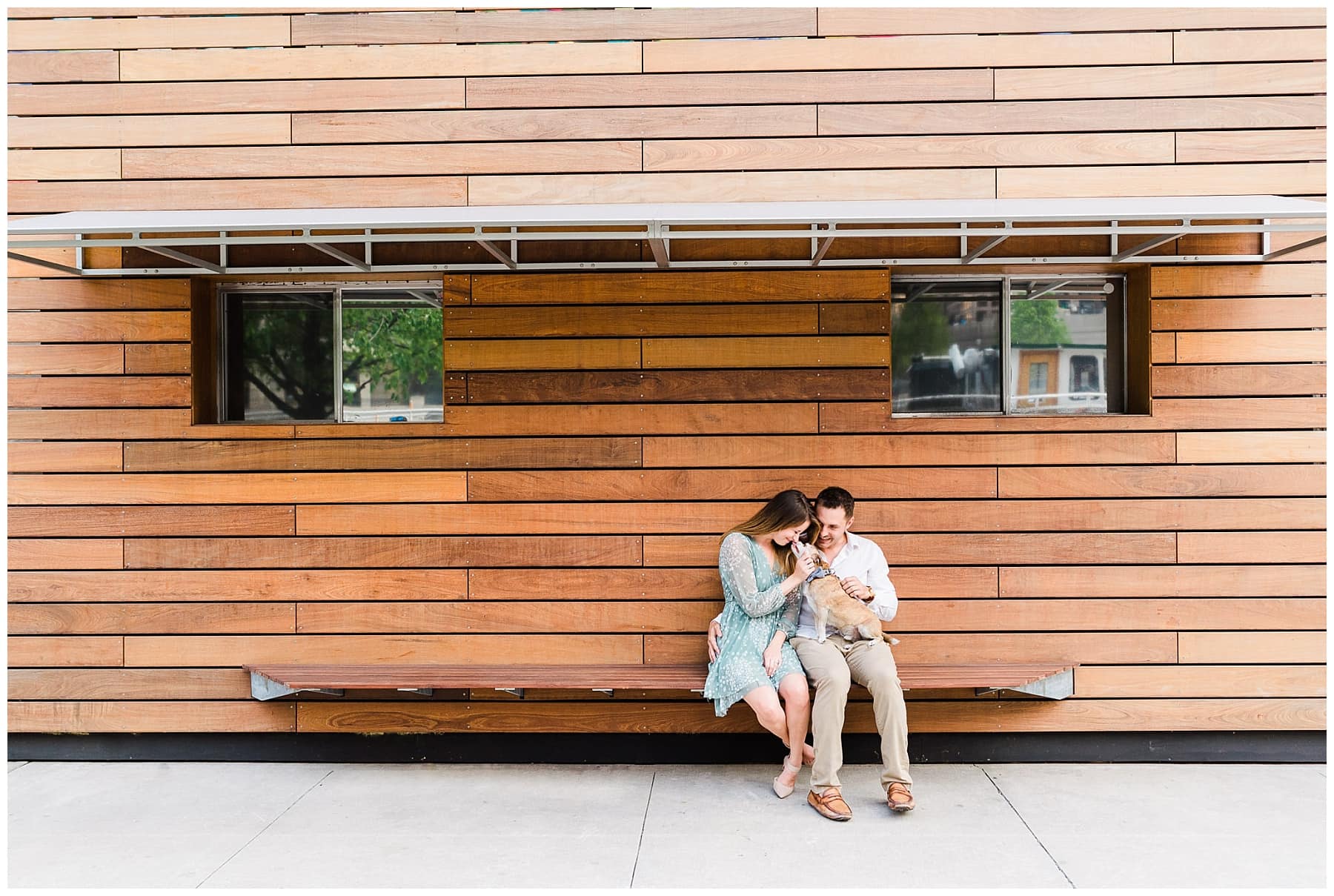 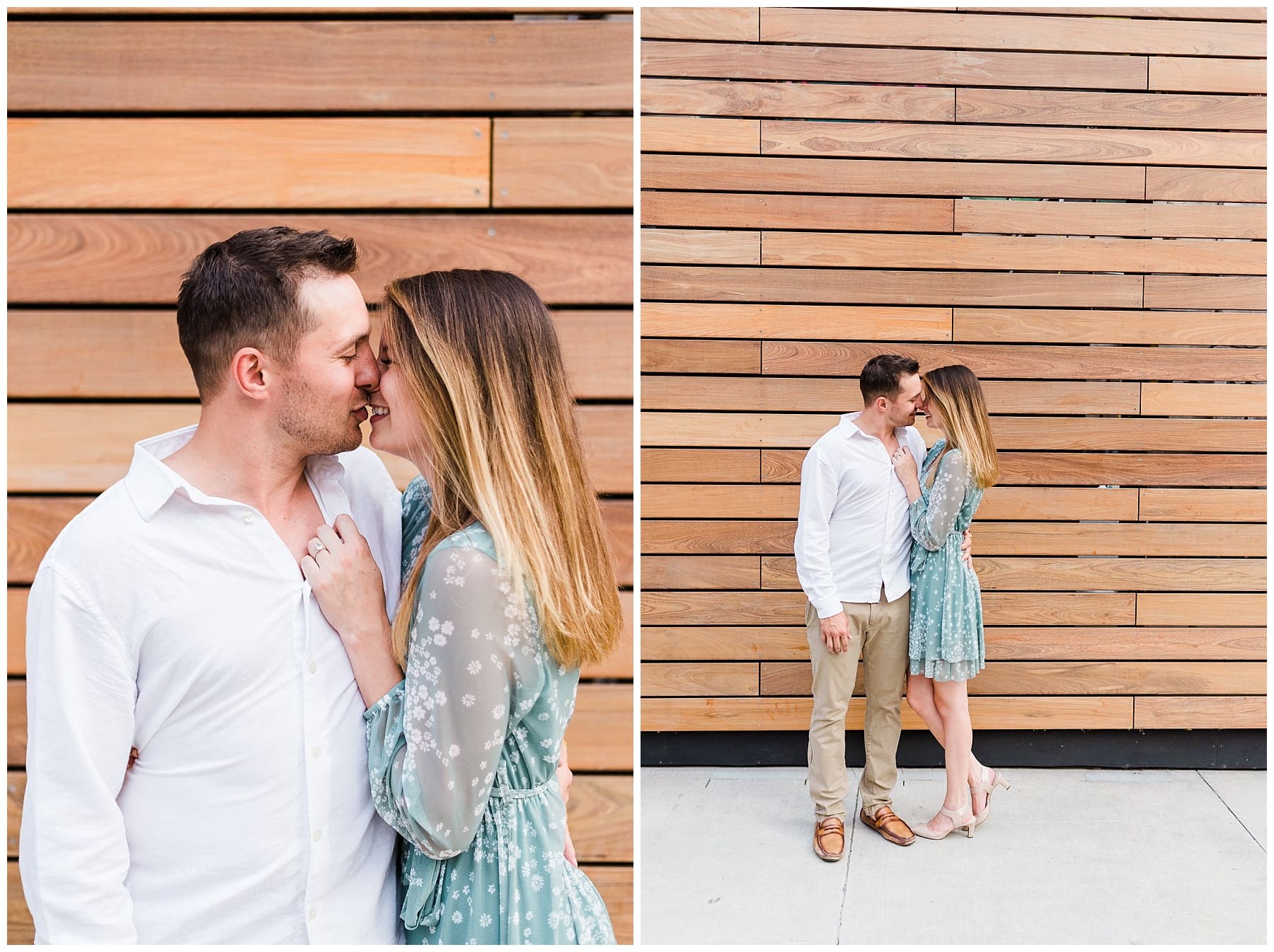 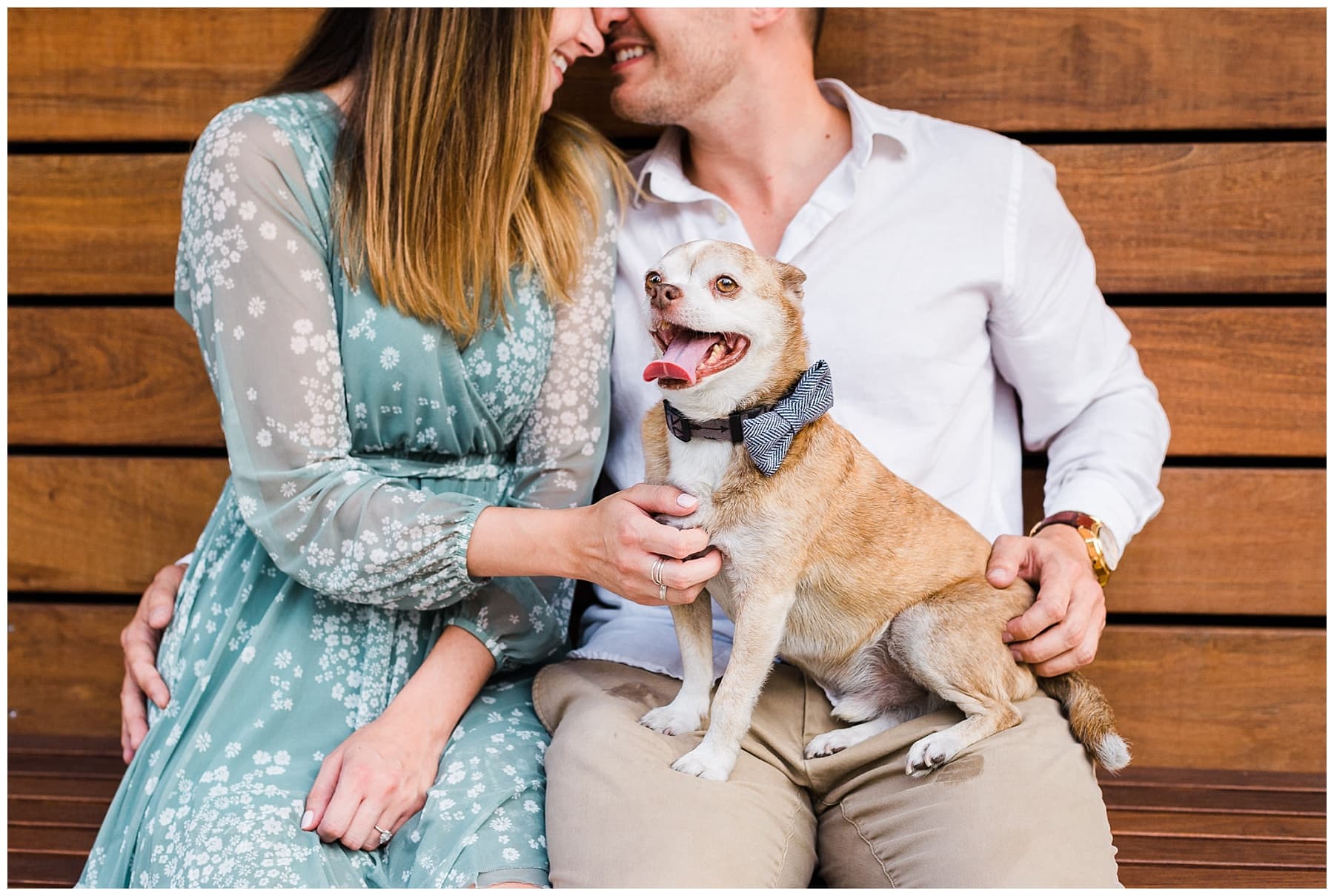 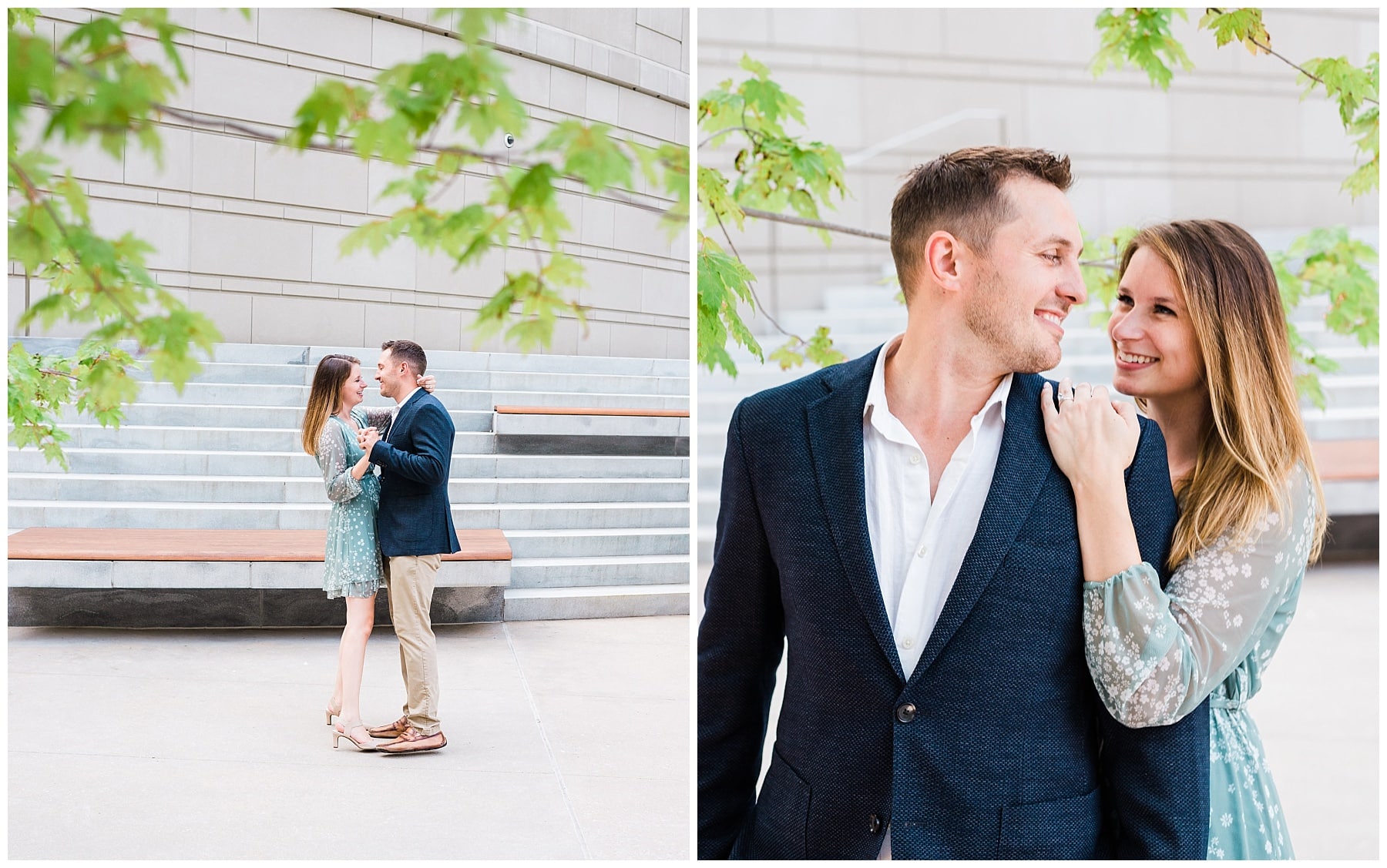 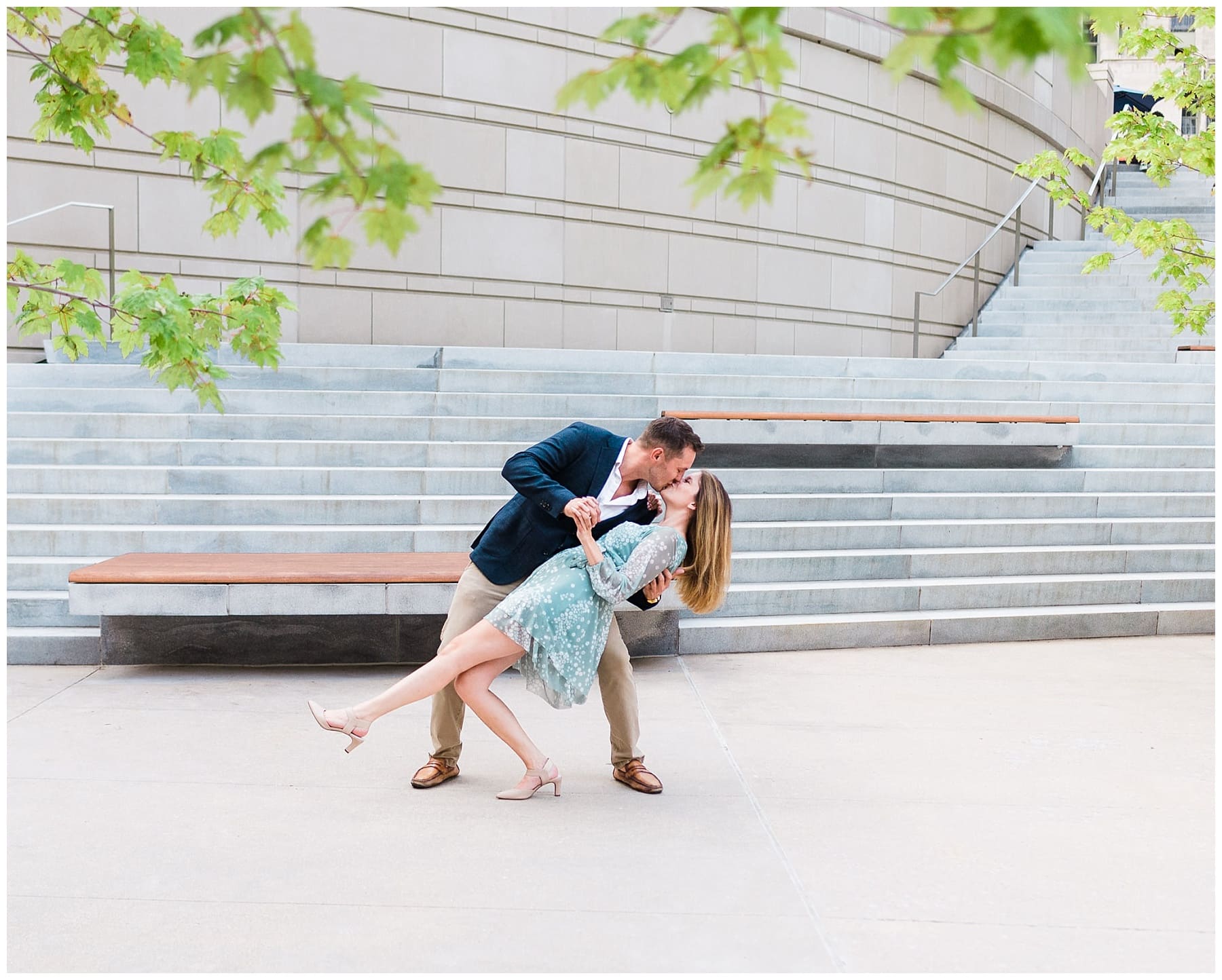 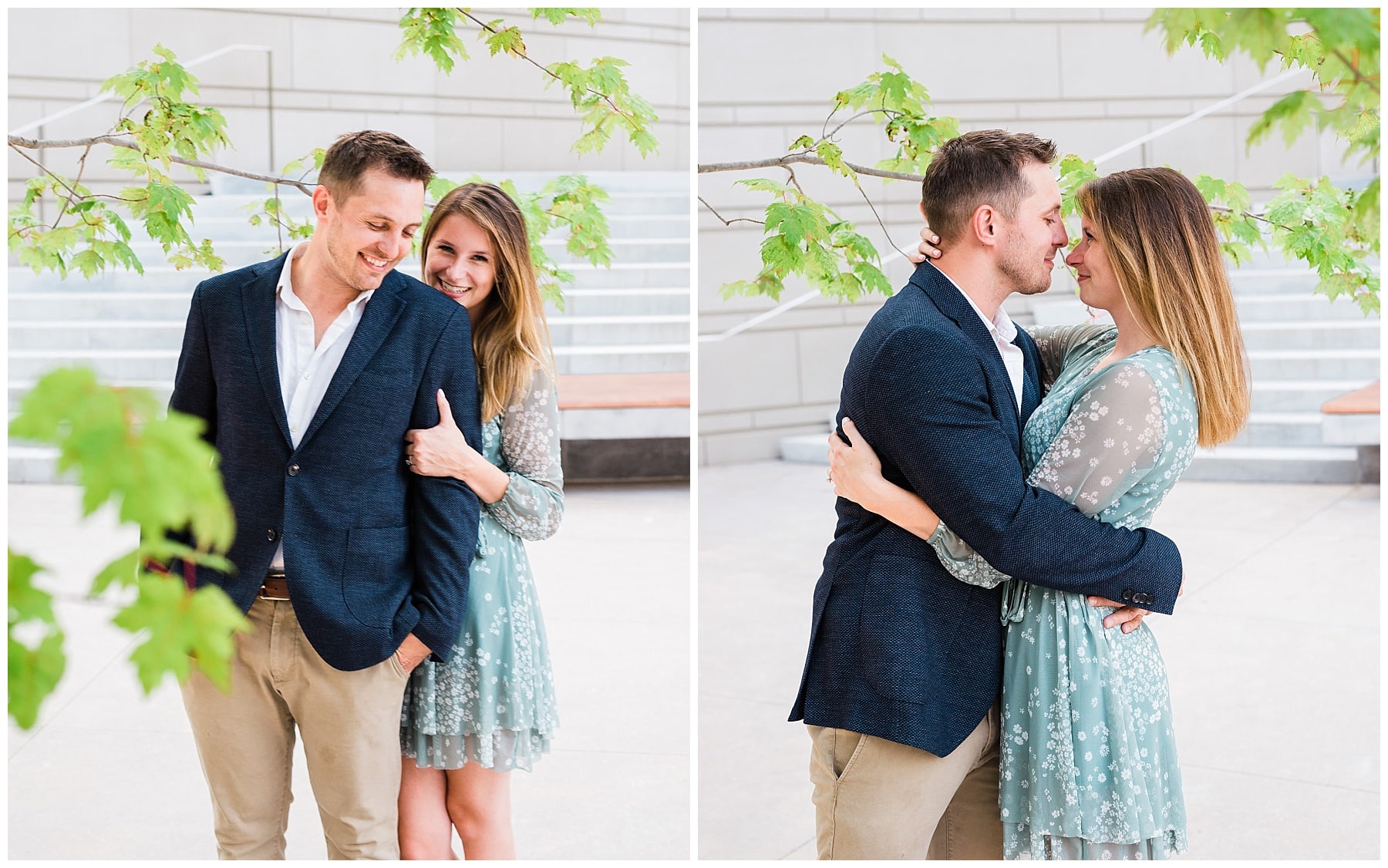 What are you most excited for about your wedding?

Rylee and Tom are most excited to join together two amazing families into one big,  interconnected family. They are both super close with their families, so having a chance to celebrate all together is just amazing. Oh, and ice cream cake. (Are you sensing a theme, here?)

Your love story is made into a movie… What is the title?

I stumped Rylee and Tom with this one. I have it on good authority that their dog frequently goes to the office with Tom where he enjoys treats from the staff; Rylee commented that Augie might make a documentary about them, focused mainly on the fact that they don’t give him enough bacon snacks. (Sorry, Augie!) chicago riverwalk engagement session

Rylee and Tom are both incredibly passionate people, and they channel so much of their energy into their passions. Tom loves all things golf, Da Bears, Tesla, and works so hard at his career. Rylee loves reading, children, and she works tirelessly to advocate for those with developmental differences. Their shared passion is relationships. Whether with each other, their friends, or family, relationships mean the most to them!

Are you engaged and looking for a Chicago Fine Art Wedding Photographer?