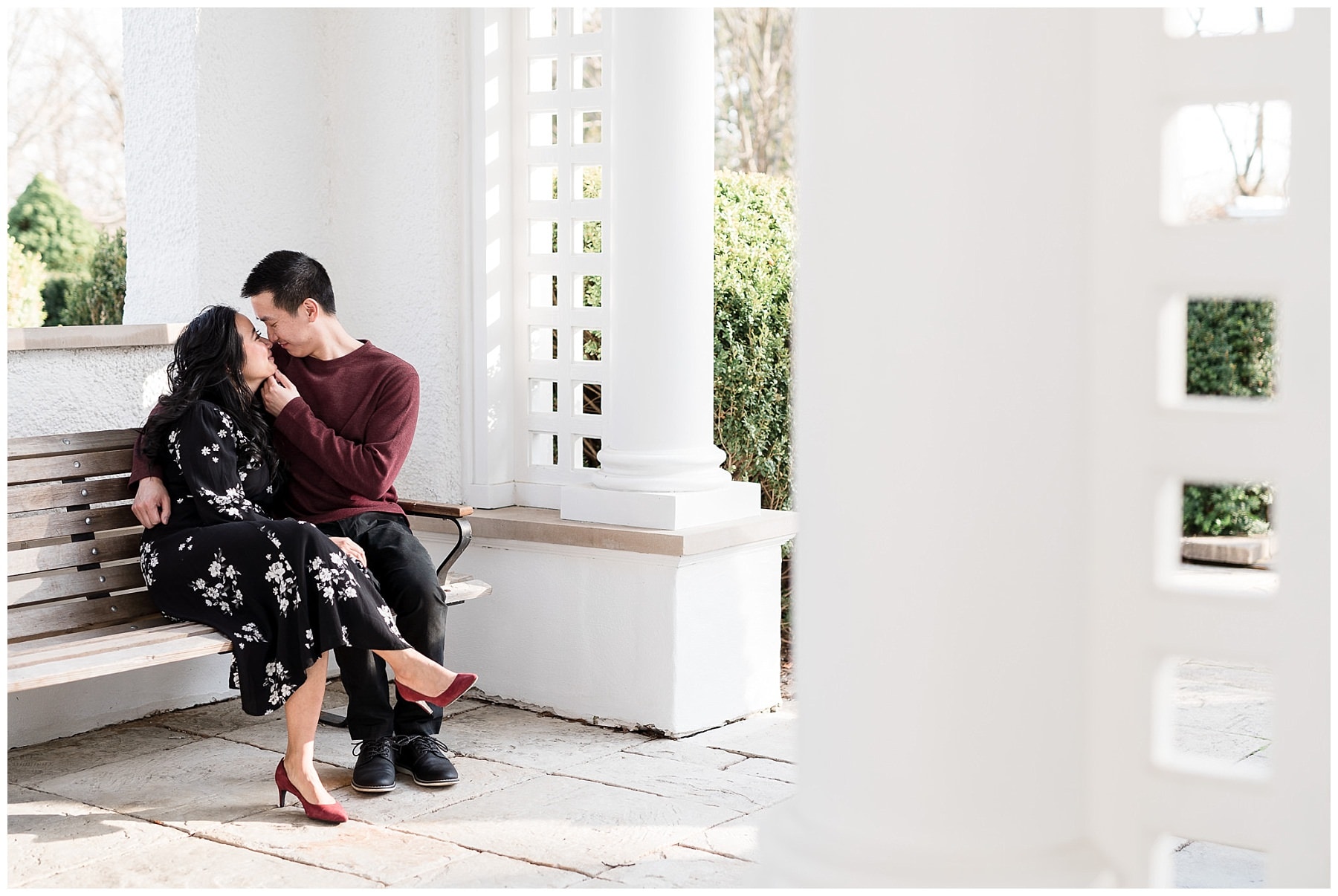 How did you meet?

We met the beginning of our junior year of college. Tiffany was on her way to class and saw Ken talking to a mutual friend, Nora. However, she just thought Ken was a random guy selling his textbook to Nora and didn’t think too much of him. Ken, on the other hand, saw Tiffany and she immediately caught his interest. Later, he asked Nora about Tiffany, friended Tiffany on Facebook, and waited to start a conversation with her on Facebook chat. Tiffany never logged in though. Ken kept asking Nora to introduce him to Tiffany, and Nora finally asked her if she’d want to meet Ken, which Tiffany begrudgingly agreed to this meeting. We met in the quad one afternoon, and we instantly connected through our similar sense of humor. There was an ease to our conversation without any awkwardness. From then on, we texted everyday and had hours of phone conversations for about two weeks before Ken finally asked Tiffany out on their first date.

How long have you been together?

How did you fall in love?

Tiffany: There isn’t one exact moment that made me fall in love with Ken, but there were various times that made me fall in love with him. One time was when it had just stopped raining while we were in college. Ken and I were walking with a friend, and I wanted to skip and jump in puddles because I bought new rain boots. Ken and I skipped down the sidewalk while holding hands and jumping in all the puddles together. I loved that he was goofy and not embarrassed to be a kid again with me.

Ken: Back in college, I was a member of the boxing club. We met twice a week to hone our skills, and I never missed a session because I loved working out with my fellow boxers. That was until I started spending time with Tiffany. We would hang out together, play games, and talk for hours to the point that I forgot about the boxing session. That was when I realized that I loved someone more than boxing.

How did he propose?

Ken: I wanted to create a day with all of Tiffany’s favorite activities. In the morning, we had brunch at a restaurant we’d both never tried and after brunch we grabbed tea at a local coffeeshop. I asked a mutual friend, Pao, to invite Tiffany over for a manicure day to practice doing nails for an upcoming (made up) jewelry modeling event. So after grabbing our drinks, we stopped by our friend’s house. However, the manicure day was to have Tiffany’s nails look nice for post-engagement pictures. Unfortunately, the manicured nails plan fell through because Tiffany was adamant in not having her nails painted that day. Despite that bump, I continued on with the plan as intended. I brought her to the Chicago Botanic Garden with the intention of proposing on the forest trail since Tiffany enjoys hiking and fall foliage. However, once we got to the forest trail it was underwhelming and the setting didn’t feel right since there were many people around and I knew she wanted a more private proposal. My backup plan was a forest preserve down the street from the Botanic Garden, so I suggested we check it out since the forest trail was a letdown.

As we walked through the forest preserve, I pointed out the picturesque sight of the sun shining through the trees. I asked her to pose for a picture while looking at the light. When she turned around, I was on one knee holding the ring. I had a poem proposed, but even after 12 years together I was so nervous that I forgot the poem on the spot. I also forgot to actually ask the question since I was so nervous. I made reservations at Aboyer in Winnetka, and we enjoyed our first dinner together as an engaged couple under the moon.

Tiffany: The week leading up to the proposal I suspected that Ken was going to propose. Typically, I’m the planner in the relationship, but that week Ken mentioned he made reservations to different restaurants that Saturday for us to try. Also, he booked tickets to the Chicago Botanic Garden without seeing if I would be interested in going there. During the same week our friend, Pao, slowly started telling me about a jewelry event that she would be attending and wanted to practice painting my nails. As the week progressed, I became more suspicious as her event became more elaborate. By the time we arrived at Pao’s, I was 99.9% sure he would propose later that day and that she was in on it as well. As a joke, I decided to throw a wrench in their plans and took a stand against having my nails painted. Each time I tried to stand on a certain side of Ken, he would feign pain on that arm and ask me to stand on the other side. He mentioned after he proposed that the ring was on that side and he was scared I would find the ring box.